Meet the Feast Sisters: Aurora (the headmistress), Australis (the hacker), Corona-Borealis (the forensic accountant), and Solar (the short seller).

The Feast family doesn’t celebrate “normal” holidays.  Instead, the family kicked off a holiday realignment that ended with new holidays and new times to celebrate the holidays they decided to keep.  Their get together usually had at least two peeps you never wanted to see again and food that might turn you into some kind of -tarian, be it vegetarian, meat-atarian, or dessert-atarian.  And there was mayhem.  Sweet tea.  Hooch.  And possibly flamethrowers, because this is the Feast family and they are equally ready for fun and for some insurgents to drop by. 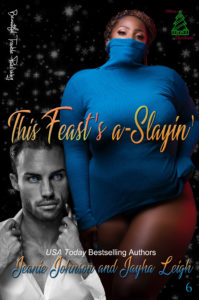 Blurb for This Feast’s a-Slayin’:

The offspring of a luxury cruise ship chief purser and chief staff engineer, Solar was used to being in the company of people who knew things. Mastermind that she was, Solar made it a habit to learn the things that they knew, via eavesdropping, polite inquiry, or helping them loosen their lips with a bespoke hooch called “This is what formed the canyon in the Grand Canyon, the Colorado River just gets all the credit.”

Her active listening skills, in addition to her careful pouring technique, helped her gain the knowledge to become one of the most prolific short-sellers anywhere. Using part of her college fund, she’d made her first million by the time she was fifteen. By the time she was twenty, she—and her sisters and their progeny—never had to work again. But that didn’t stop her from working. Her job was getting hired by companies going out of business and then seeing just how many shenanigans she could get away with before they asked her to leave. One time, they’d tried firing her; but she just bought the company and fired the guy trying to fire her…before quitting…and using the loss as a tax write-off.

Her days were filled with shenanigans; her nights were filled with f*ckery, minus the d*ck. And then, one day, she broke her own rule and did something dumb. She RSVPed to a Not Jesus’ Real Birthday Day (Christmas) dinner as her family had elected to go somewhere that required a coat, which was a “no, no thank you, NFW” for her.

Had she known this was an alternative Not Jesus’ Real Birthday Day meal, hosted by people who a) didn’t have a stove; b) had “alternative” meat; and c) didn’t eat bread, she would’ve just wrecking-ball-craned the entire community and put everyone out of their misery.

If Azur Dragonera did what he always did, he would’ve been sequestered in his lab engaged in research. A vampire in his prime, everyone was trying to marry him off, so he’d fled to southern California because six-thousand miles between him and his family was a good start.  He’d planned to spend the holiday alone in his presidential suite at the five-star resort with all the accoutrements that came with it. But his mamá was involved and she’d involved his friend, and now he was attending a pre-Christmas meal.  Nothing on that buffet was going in his mouth, but no worries, he had a front row seat to all **** breaking lose.

Someone should’ve told that Solar that there wasn’t going to be meat, or bread, or cooked food, or any give-a-damn that all of those things were missing. Anyone with a modicum of sense could see that this scene was going bad quickly, but meat deprivation and taste deprivation will cause all manner of side effects. The look on her face promised retribution. However, when the words “fake-meat-eating butt-sunner” spilled from that tempting mouth, Azur knew one of the side effects was about to be a massacre, which was out of place for the season.

Perhaps if Solar hadn’t been so tempting, he would’ve sat back and watched chaos unfold, but she was tempting, and he had a luxury helicopter at his disposal, and a hotel an hour away that had a full-on Christmas spread…complete with five kinds of bread. Solar was his…she just didn’t know it, but any man who saw the look on his visage would know without a doubt that he was on the hunt. 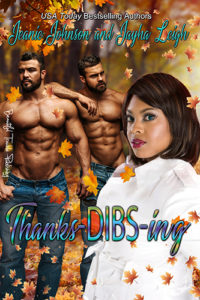 Lothar and Gumarich Brynjar were in a department store, of all places, because the local feed and supply store was closed for the holiday season, which began the day before the last Thursday in November and lasted until January 02.  Apparently, the owners enjoyed spending time with their family.  That didn’t mean they had to inconvenience everyone else in the whole damn town and close down.  Of course, no one else seemed to mind because they were busy celebrating by ingesting any and all things with ‘pumpkin’ as an ingredient, trying to out-ugly each other with sweaters, and buying a bunch of shit they didn’t need. Never mind, that they, themselves each had several homes and vehicles.  However, that wasn’t the point.  The point was that life didn’t pause for the holiday season.  Case in point.  The new nail gun that Lothar and Gumarich needed.  Apparently, no one else considered it unseemly to buy a power saw at the same store where one could buy a duvet cover.   They could’ve gone the whole of their lives not stepping foot in a department store, but here they were, surrounded by people.  Yuck.  At least the tools section (and that was stretching the truth) was relatively quiet, save for the few men who were hiding out in a bid to get away from the chaos.  Suckers.

They were all set to pay and haul ass, but there was a woman in front of them who looked like she was about to set it off.  She didn’t have an attitude, but what she did have was a litany of items that suggested a helluva party or a helluva bad ending for someone.  From the looks on the other customers’ faces, they weren’t alone in wondering what was about to pop off.  It wasn’t every day that you saw a woman, especially one that was all hips, and ass, and impatience at the checkout with a sledgehammer, an air compressor, some peep-toe pumps, and a sparkly clutch purse.   Should her shopping cart cause them both to get erect?  The image of the voluptuous woman wearing nothing but those pumps while wielding the sledgehammer had both of them making all manner of dirty wishes for the holiday season.

Corona Borealis Feast had other shit to do, but one of her lunatic sisters had decided to throw a semi-formal ThanksDIBSing Day barbeque, which happened the day after normal people’s Christmas. It was going to end as it always did―infinite fuckery.  It couldn’t be helped.  Not when it was a) the Feast sisters who had talked their parents into allowing them to create their own holiday calendar, and b) since it was close to This Ain’t Jesus’ Real Birthday, but since y’all want to pretend, whatever, but we ain’t pretending with you day.  Corona Borealis didn’t begrudge the holiday.  She liked fuckery as well as the next Feast sister.  She begrudged buying dress up stuff, of which she had very little being she worked from home.  Key phrase: worked from home, which she did for a reason.  Because she couldn’t effing stand people for the most part.  And now she had to a) be around people without causing them some kind of damage; b) wear something decent because, apparently, her go-to ensemble of sweatpants, dress shirt, Crocs, and argyle socks was offensive; and c) participate in the get-together, rather than hide out in the master closet and play games on her phone.  So here she was, buying sh*t she would probably never need again.  On the plus side, she got an air compressor on sale and a sledgehammer.  Air compressors were great for starting fires and sledgehammers were okay for a bludgeoning situation.

She was all set to pay and haul ass when she spotted twin hotties out of the corner of her eye.  Suddenly, she wasn’t so annoyed.  Instead, she was flashing, imagining a three-some for Thanksgiving that would last the entire holiday season.